Well, friends… it’s been a while. Over a year apparently. I really thought there were some more posts mixed in there, but I guess not… I intended to write a post about turning 29 (and Lucie turning 2), but that didn’t happen with the craziness of my sister’s SURPRISE WEDDING. 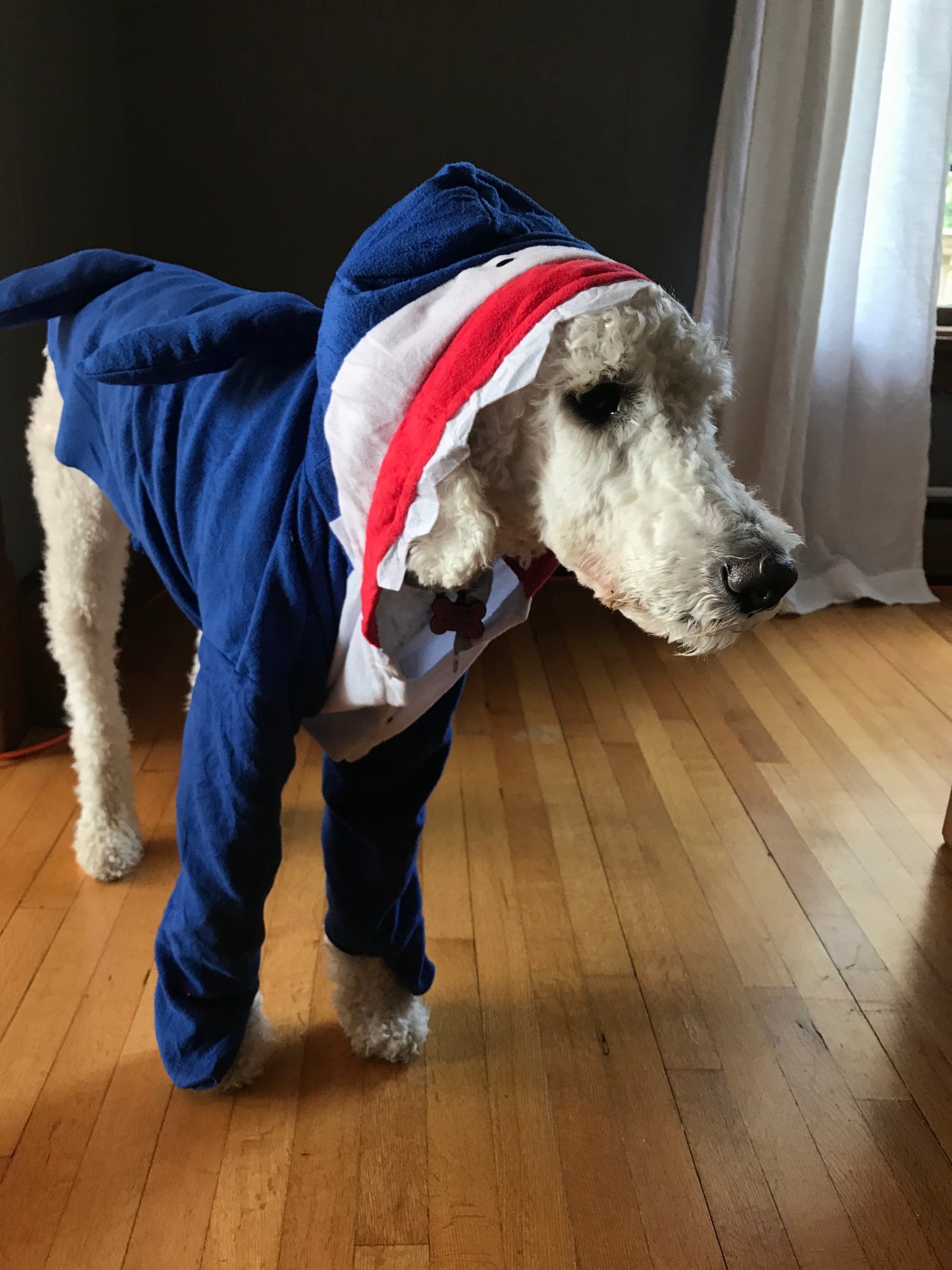 I’m afraid of sharks, so this week tends to freak me out more than excite me. I never want to go to the ocean again after watching half an hour.

BUT I’d never miss an opportunity to dress up my dog as something adorable.

Naturally, I needed a shark costume. And no dog outfits were big enough for Lucie… I started looking at children’s costumes (my dog is almost as tall as I am standing on her hind legs and can put her paws on my shoulders) with the goal of finding something under $20. I wanted a hoodie, because the legs wouldn’t be necessary… but they were all too expensive.

After much searching, I found this one on Amazon and bought a 6T (in case you’re every shopping for a poodle). This was NOT something I should have been spending time on.

you should know that I shop on a company prime account that I share with a few other people. they were concerned when they saw a shark costume in the “orders” section. yes, it was on purpose. 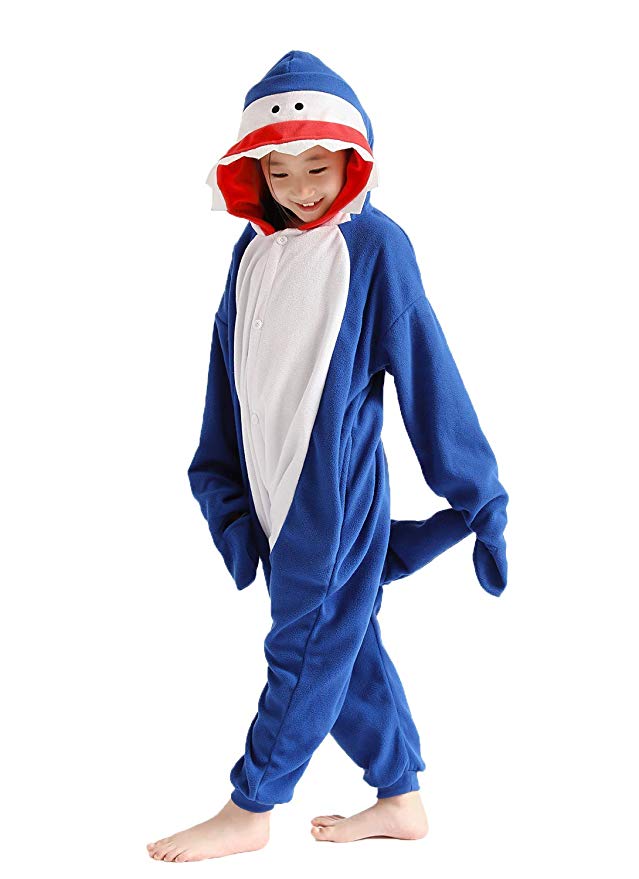 The costume arrived, and I tried it on Lucie without any alterations. I shared the experience on instastories… and I don’t think it’s an exaggeration to call it the best piece of content I’ve ever created. I’ve included it in the youtube video below, so you don’t miss out.

I cut off the legs, and took in the belly section to fit a little better. Then I used the scraps to fill in the fins a little bit better… They still didn’t stand up very well, but I guess that’s what happens when you buy the cheapest shark costume sized for a different species.

And honestly, that was it.

The costume is fleece, so it doesn’t fray at all, which means I didn’t bother hemming it. I’m obsessed with the hood, and think Lucie is the cutest shark you’ll ever see. 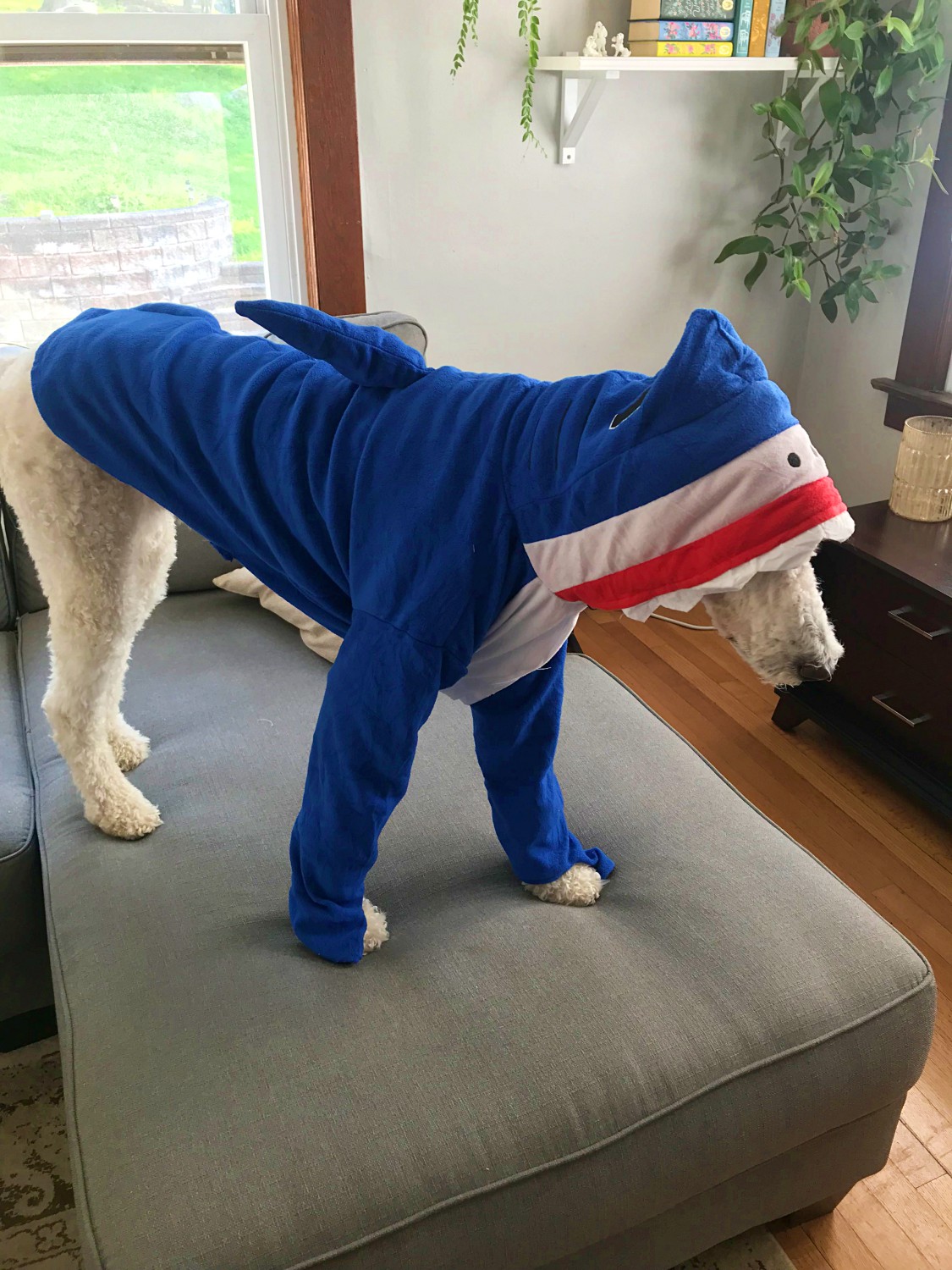 The alterations on this project took maybe 45 minutes, and I have to say it was worth it…. Have fun with the video!

Sorry for the stream of consciousness writing style… I haven’t blogged in a while. The problem is that I keep track of all my projects by blogging, so I really need to catch up on some of the things I’ve made recently. That’s all for today.