We’re home from the hospital and feeling pretty good, so I wanted to share the birth story while it’s fresh on my mind. I never enjoyed reading birth stories until I was pregnant, so I understand if you skip this post ha. But at least scroll through the cute pictures of Henry!!

First of all, you should know I was prepared for the worst. I like being realistic and knowing everything that could happen. I had a few friends who had not-so-great experiences, and while many people told me not to listen to these stories, I just didn’t want to have an idealistic vision and then be disappointed and depressed.

But delivery was surprisingly fine. I honestly hesitate to share this story at all because it went so well… My mom also had a really easy delivery (even though I was a 9lb baby), and she kept telling me it wasn’t ALWAYS bad, even though I had heard plenty of first-time birth stories that said otherwise.

As usual, all my fears were unfounded. It helps that I’m in the best shape of my life right now (if I had gotten pregnant in my early 20s, that would not have been the case). So if you’re considering getting pregnant, exercise might help. Or it won’t. Every pregnancy is different.

Like most pregnant people, I wanted to go into labor spontaneously and labor at home as long as possible. I also had a feeling this baby would be late. But with everyone telling me “any day now!” from week 37 on, I never imagined I would be getting induced at 41 weeks.

Basically, Eric and I lived every day like it was our last for a whole month 😂

But at 7pm on Oct 11, we were driving to the hospital for the scheduled induction at 8pm.

Things moved very quickly from that point on.

I showed up, signed some papers and suddenly I was in a gown, and they were giving me Cytotec (I think) as an oral pill. I was dilated like half an inch and 50% effaced. Which was discouraging because I thought I would be there forever, starving, with only ice chips and water.

When they attached me to the monitor, apparently I was having regular contractions, but they felt like pressure in my lungs.

Nurse: Look at the monitor! What you just felt was a contraction!
Me: That’s what that is? I’ve been feeling that for weeks. I thought I was having panic attacks.

By 11pm my water broke, and the kind labor nurse let me have a granola bar before she cut me off. To be fair, I did throw up several times.

Another thought – I can’t imagine my water breaking outside a hospital! It was just… a lot. 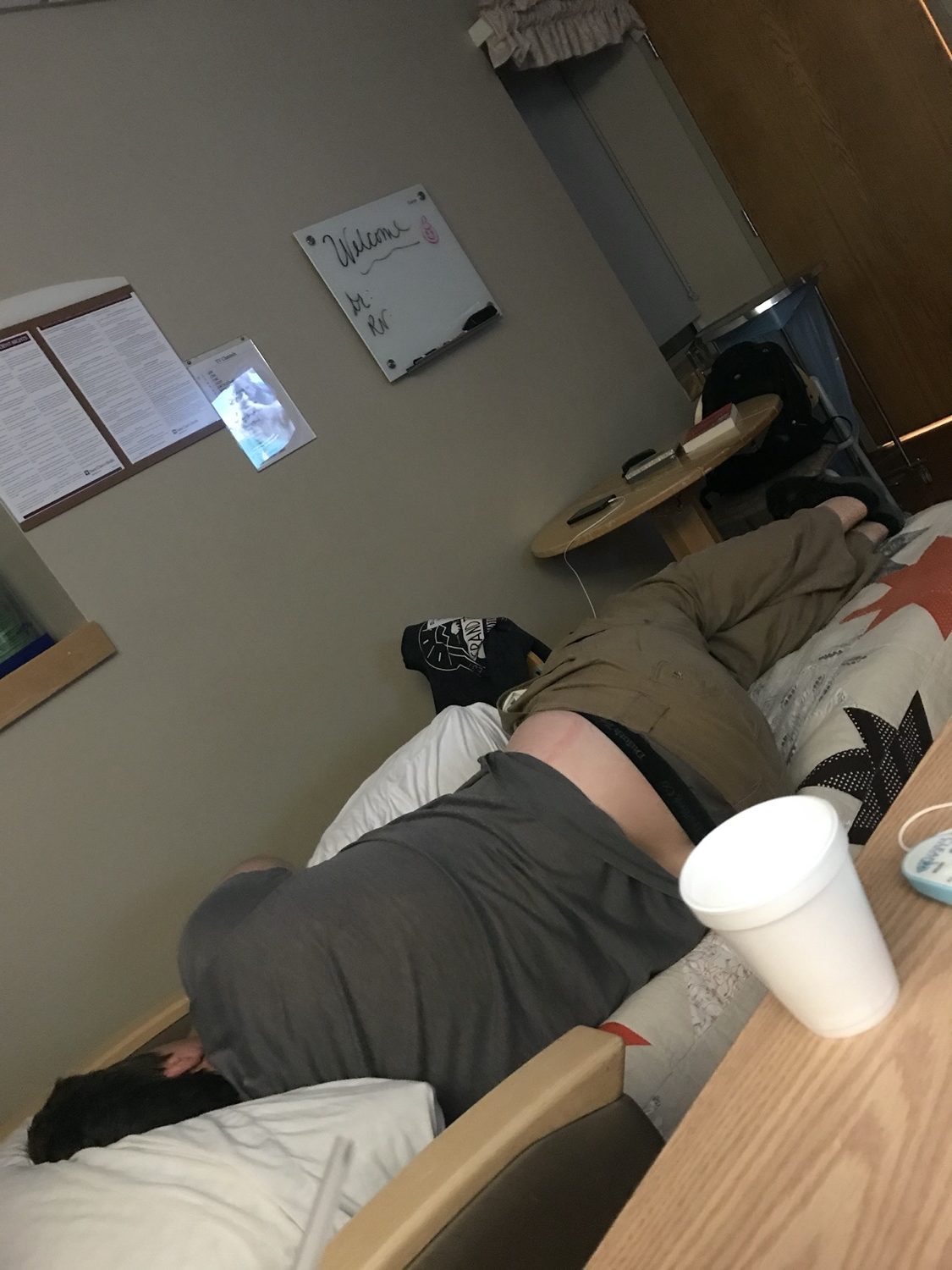 After my water broke, the contractions started hurting ha. Don’t worry – I didn’t miss out on that experience.

I knew I was going to get an epidural, and they told me I could get it whenever I wanted it. I didn’t want to be stuck in bed for longer than necessary, so I decided to wait until I got to the 5-1-1 point in my contractions (5 minutes apart, 1 minute long, for 1 hour).

That was around 5am, and unfortunately, I was still only 1 cm dilated. Kind of felt like a wimp asking for an epidural when STILL nothing was happening.

I decided I needed some sleep if I was going to survive this indefinite amount of time, and Eric was tired from hearing me groaning all night, so I decided to go for it.

I fell asleep before the anesthesiologist left my room.

The baby’s heart rate did drop, which was concerning, but they fixed it in a few minutes (pretty sure I slept through most of this). Then I was very nauseous, so they fixed that.

And then I fell asleep for 5 hours, which was great.

They planned to start Pitocin at 8am, so the doctor came in to check on me. OMG I was still 1 cm, barely effaced, and -3 station (aka the baby had barely dropped yet).

But Pitocin does the trick. Very glad I had an epidural because between 11am and noon I went from 3cm to 7cm, and I don’t want to know what that feels like without medication 🥴

Then the pressure started building and every 30 minutes I was calling the nurse to ask if it was time to start pushing.

FINALLY, around 4pm the nurse said “well, we have some pushing to do, but we could get started.”

Me: How much pushing? If you think it’s too soon, we can wait.

But she said to get started.

I only pushed for 40 minutes 🎉

My doctor told me all my friends will be mad at me when they learn this information. The average first-time mom pushes for 2-4 hours, and that matches what I’ve heard anecdotally.

I guess I do take after my mom, who claims she only pushed twice to deliver a 9lb baby.

I remember feeling really calm and content for the 20 minutes they were recording things and cleaning him up… but I also remember thinking “I’m so glad he’s out of my body.” 😂 He was just a big baby to be carrying around. Everyone said my bump looked so small, etc. etc. but I knew he was going to be a big baby. 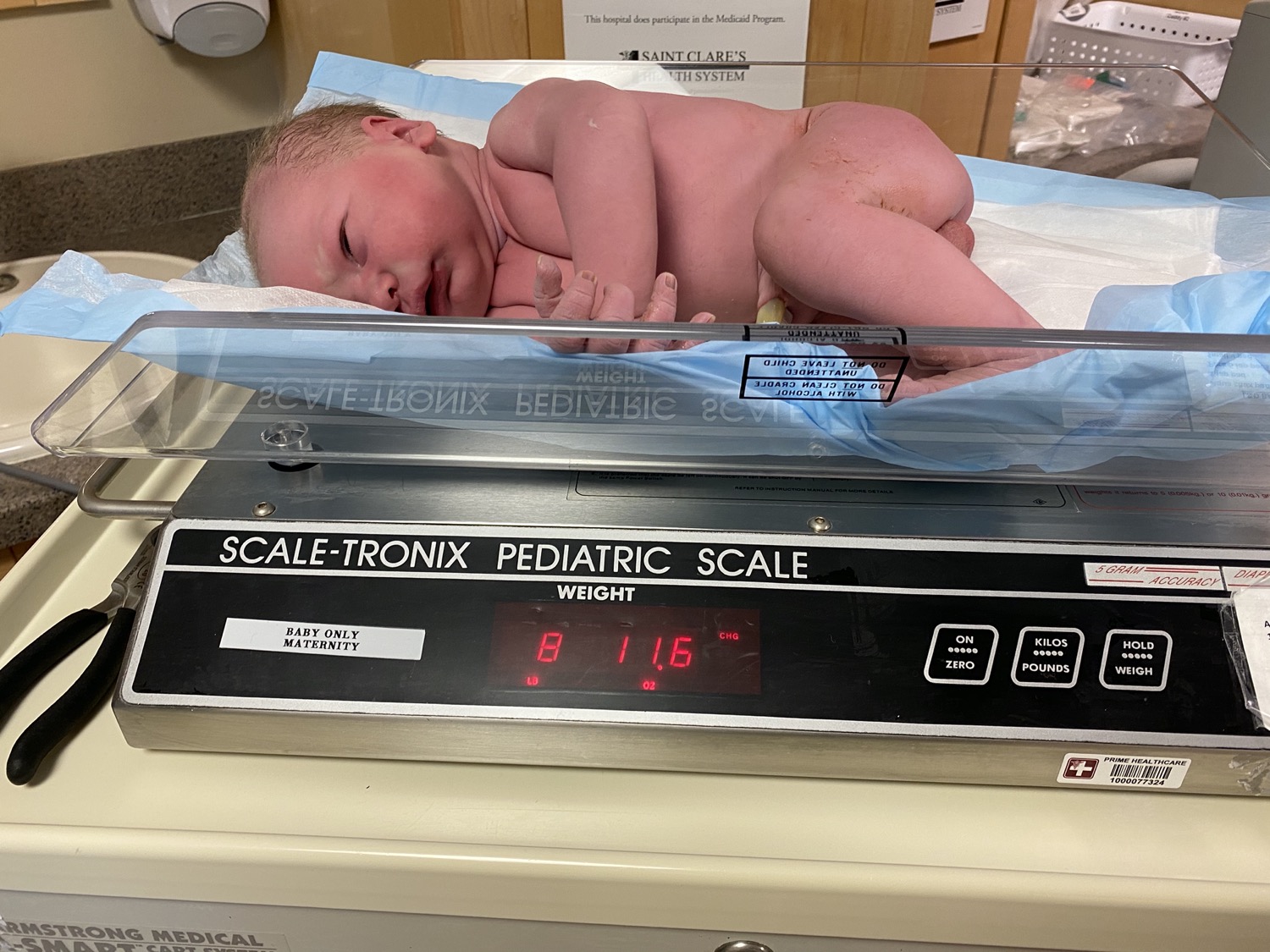 So the doctor who delivered Henry has delivered a lot of babies. He can do this in his sleep, according to the labor nurses. Which is great, until he walks into the delivery room with a coffee and looks at you, “Oh, there’s the baby! Wait, where are my shoe covers??”

Again, I was moving a lot faster than usual.

He left in search of shoe covers, while the nurse continued to press the call button to get him back in the room… because it was getting difficult for me to hold the baby in.

Eventually, he found shoe covers… and put on all the other gear necessary, and told me to push slower (which apparently helps lessen the tearing). The cord was wrapped around Baby’s neck, but they unwrapped it quickly. No problems there!

At some point, they asked if I wanted a mirror to watch… and I suddenly realized I did not want to see it. Eric says the dr put on a glove as he was catching the baby. 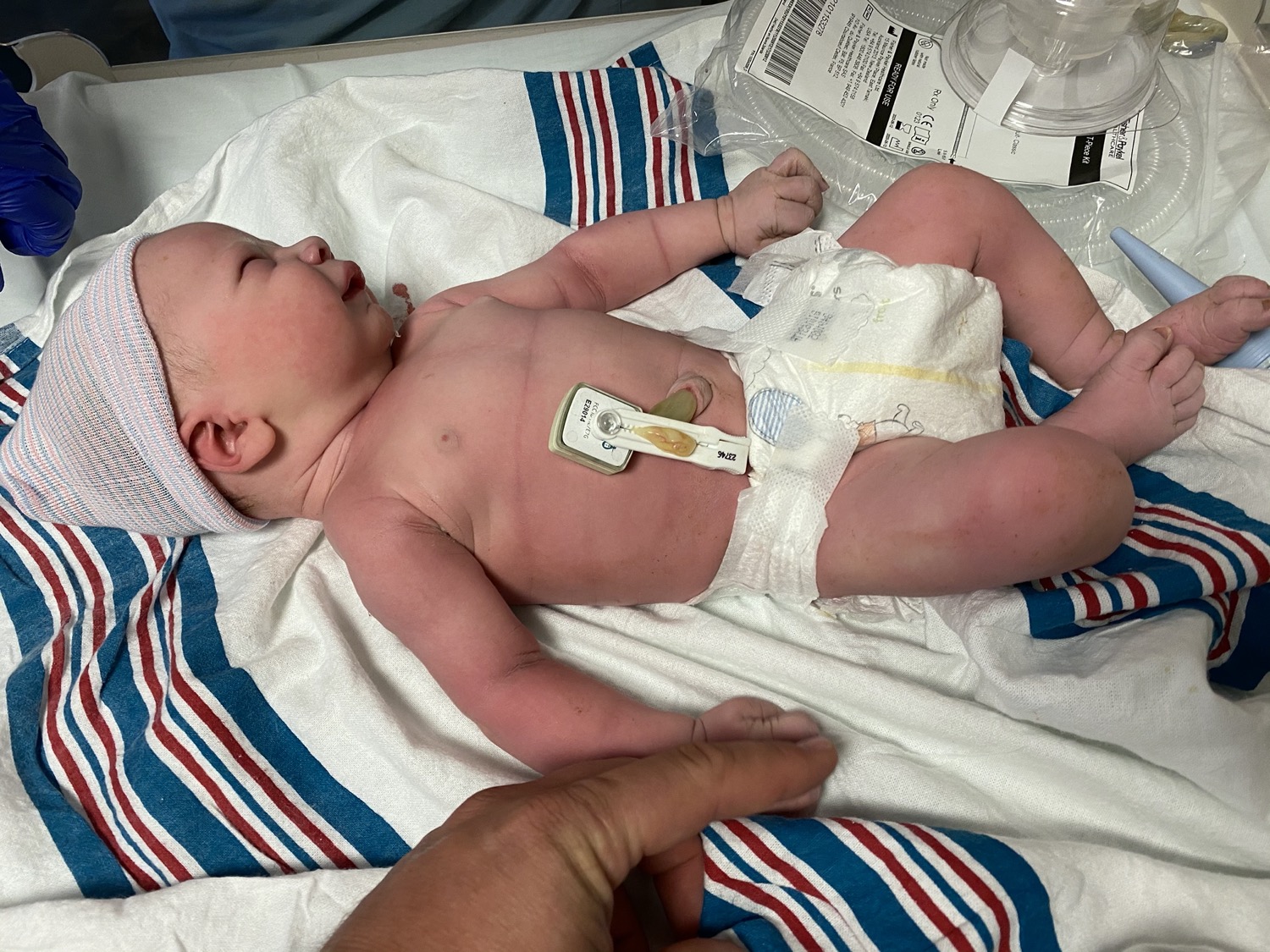 To be honest, I intended to have an unmedicated labor/ delivery. Then sometime in July, I decided 2020 was hard enough. I just wanted the baby out of me as easily as possible.

I read many birth stories: the unmediated births described it as the most intense pain they’ve experienced but feeling like a superhero afterward (and some saying mom couldn’t enjoy skin-to-skin, because they were in so much pain). Then epidural birth moms described labor and delivery as “peaceful and beautiful.”

After the year I’ve had, I needed peaceful and beautiful. And I’m happy to say that pretty much describes my experience.

I could still feel every contraction, but it wasn’t painful. Everyone says that, and I didn’t know what it meant until it happened.

Many women are concerned they won’t know when to push because they won’t feel anything. Maybe this is true for some people? Maybe they just gave me the perfect amount? I definitely could feel the contractions coming even before they showed up on the monitor.

Because they think they won’t feel anything, many women think it will make labor longer. In Expecting Better, my favorite pregnancy book, she explains that, statistically, epidural pushing is around 15 minutes longer than non-medicated pushing.

A very small amount of time considering the amount of sleep the epidural gave back to me.

I feel so blessed that delivery went easily and recovery is on track to be as good as possible. We had a genetic issue that affected feeding, so more in my next post.

Nothing is ever that easy! 🤪 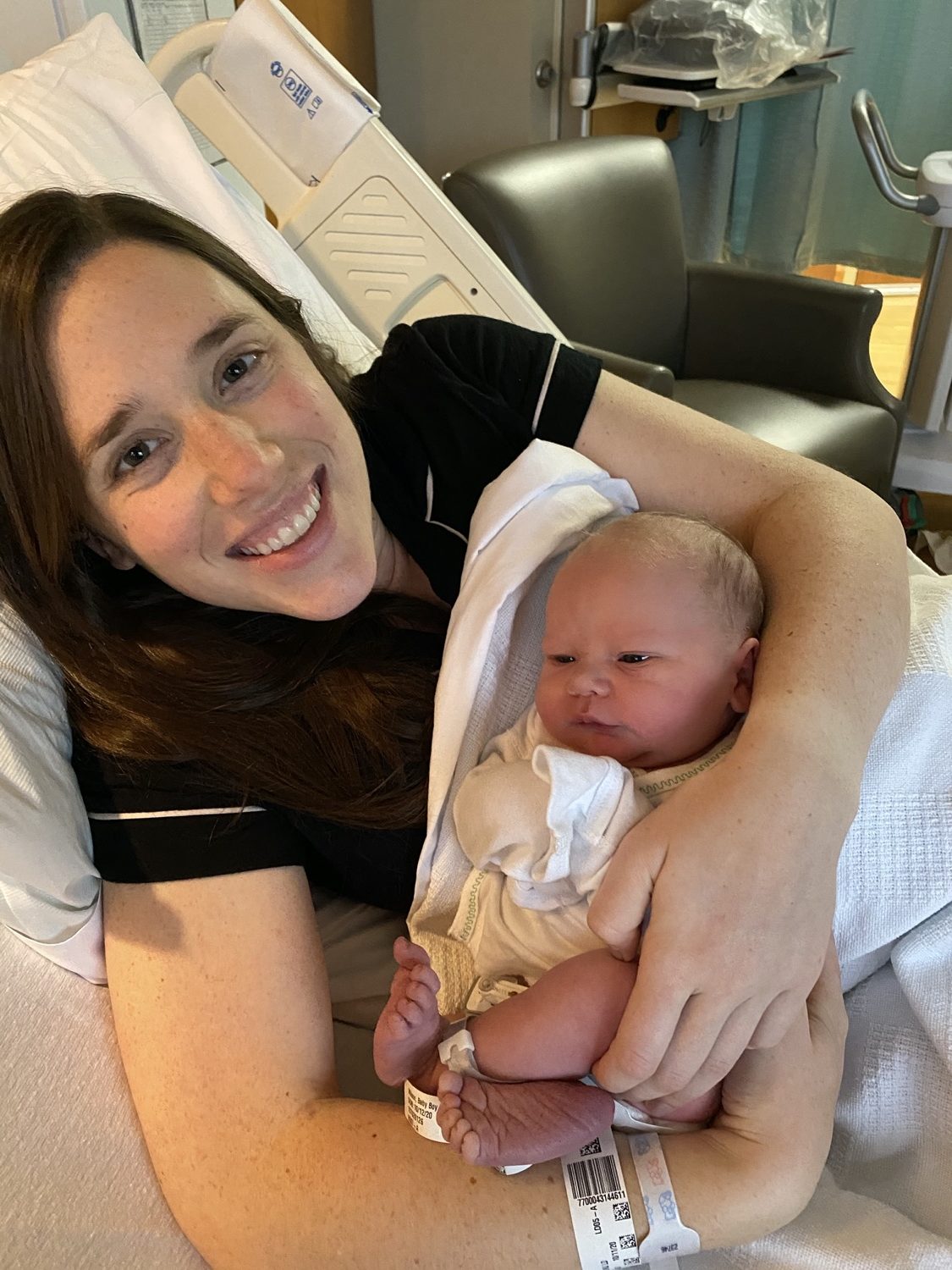