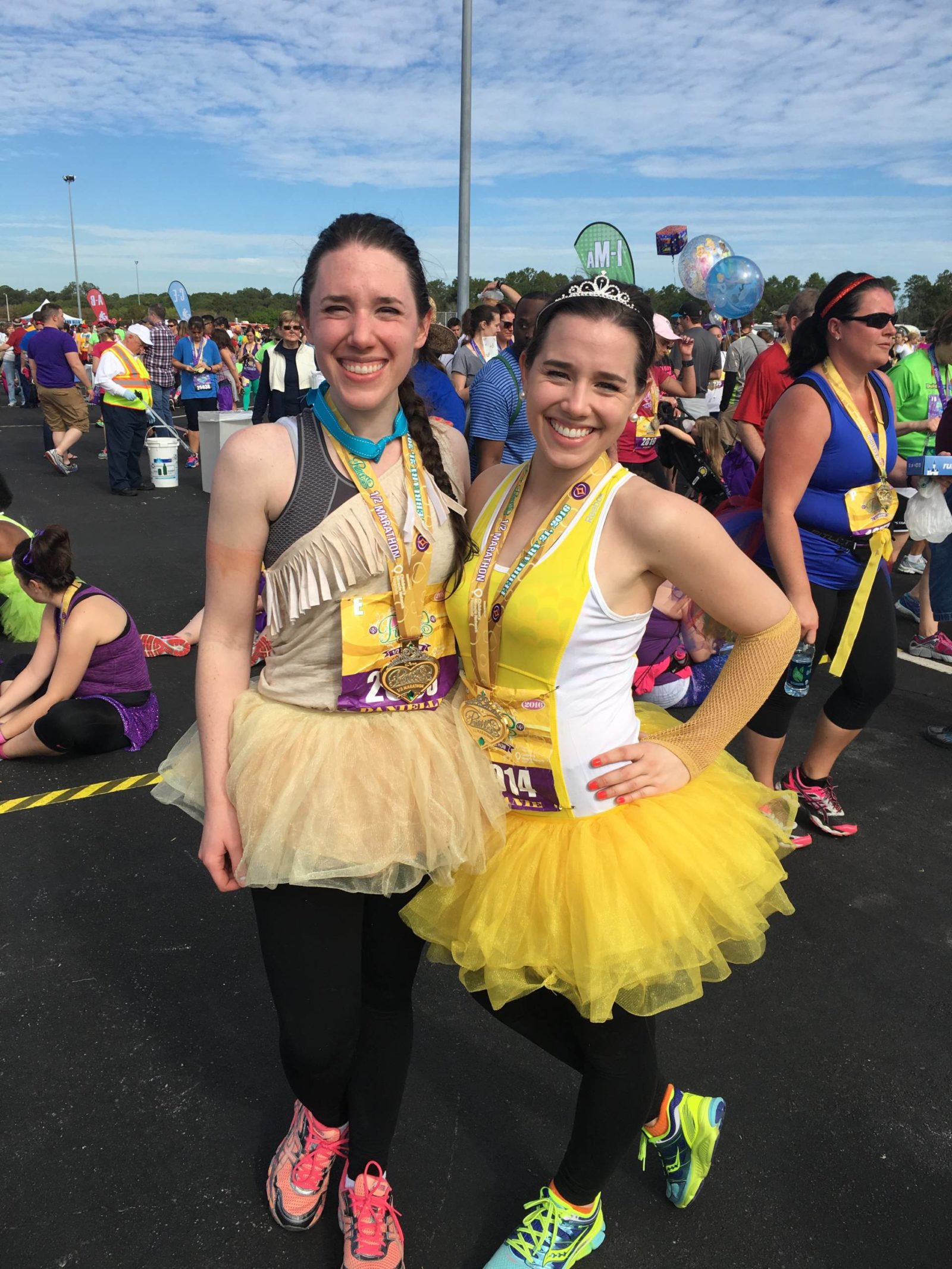 The main concern when planning a Disney Princess Half Marathon costume SHOULD BE how you feel running/walking in it – 13.1 miles requires a lot of movement regardless of how fast you’re going.

So we tried to look as similar to our inspirational princess, without the costume becoming too cumbersome.

Stef and I both wanted to be Belle, but then I realized that my hair was most like Pocahontas and always braided when I run. I was pretty excited to dress up as the only princess who could actually run a marathon…

Come run the hidden pine trails of the forest….

These 2 tutorials provided the most inspiration. And I realize that Pocahontas doesn’t wear a tutu, but this is the Disney Princess Half Marathon, and you need to wear a tutu or why would you run it at all??

I started with this long sleeve tshirt from Walmart. I knew I could use the long sleeves for the fringe, and I chopped them off! 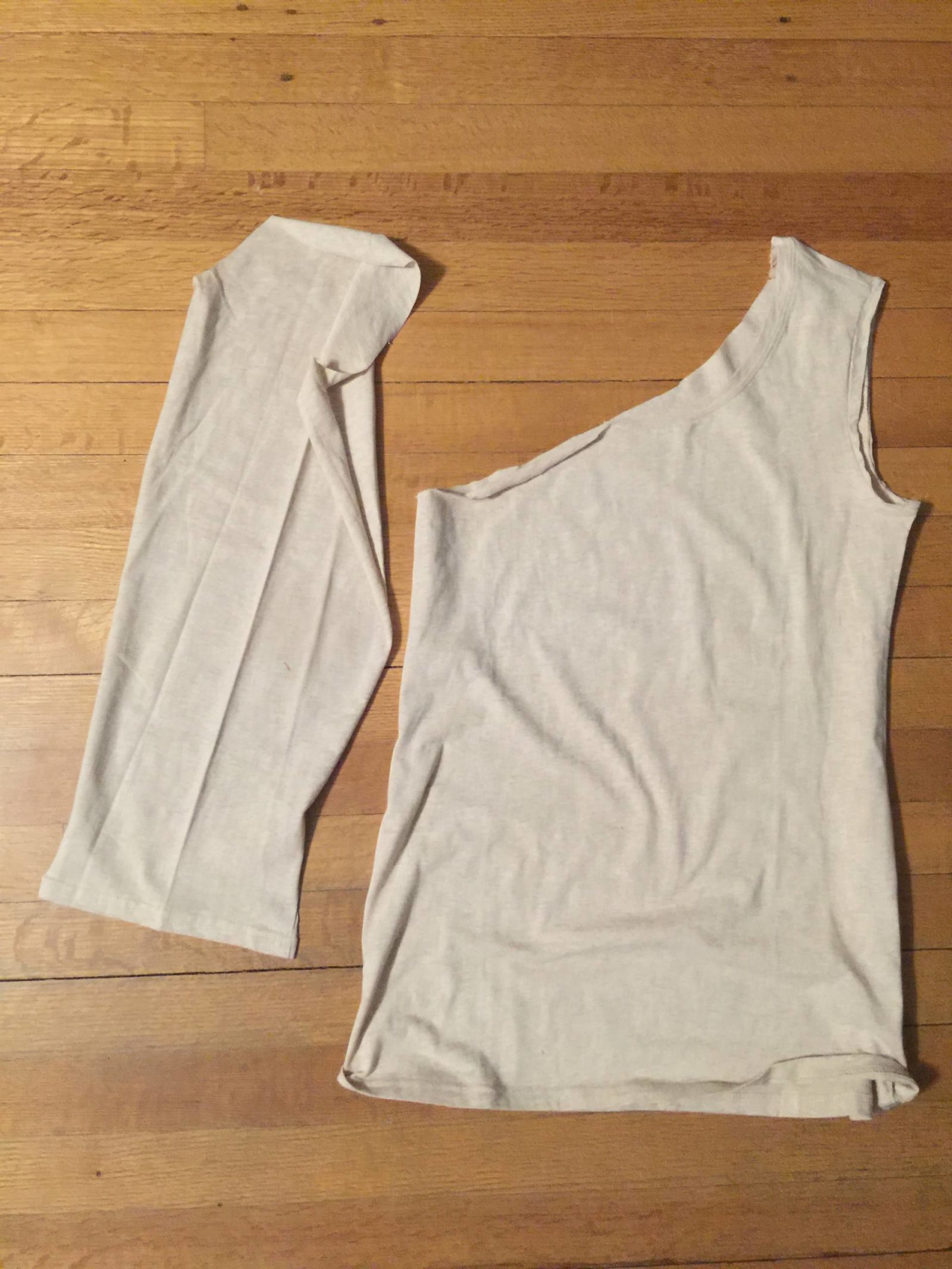 One of the tutorials mentioned that the fringe would curl since it was knit… and to avoid that problem, I just ironed on some thin interfacing to the back.

I sewed the strips of sleeves onto the tshirt BEFORE cutting it into fringe. I thought I took more pictures of this, but it was after midnight and it looks like I forgot…

Then I took in the sides a little bit because it was too big. 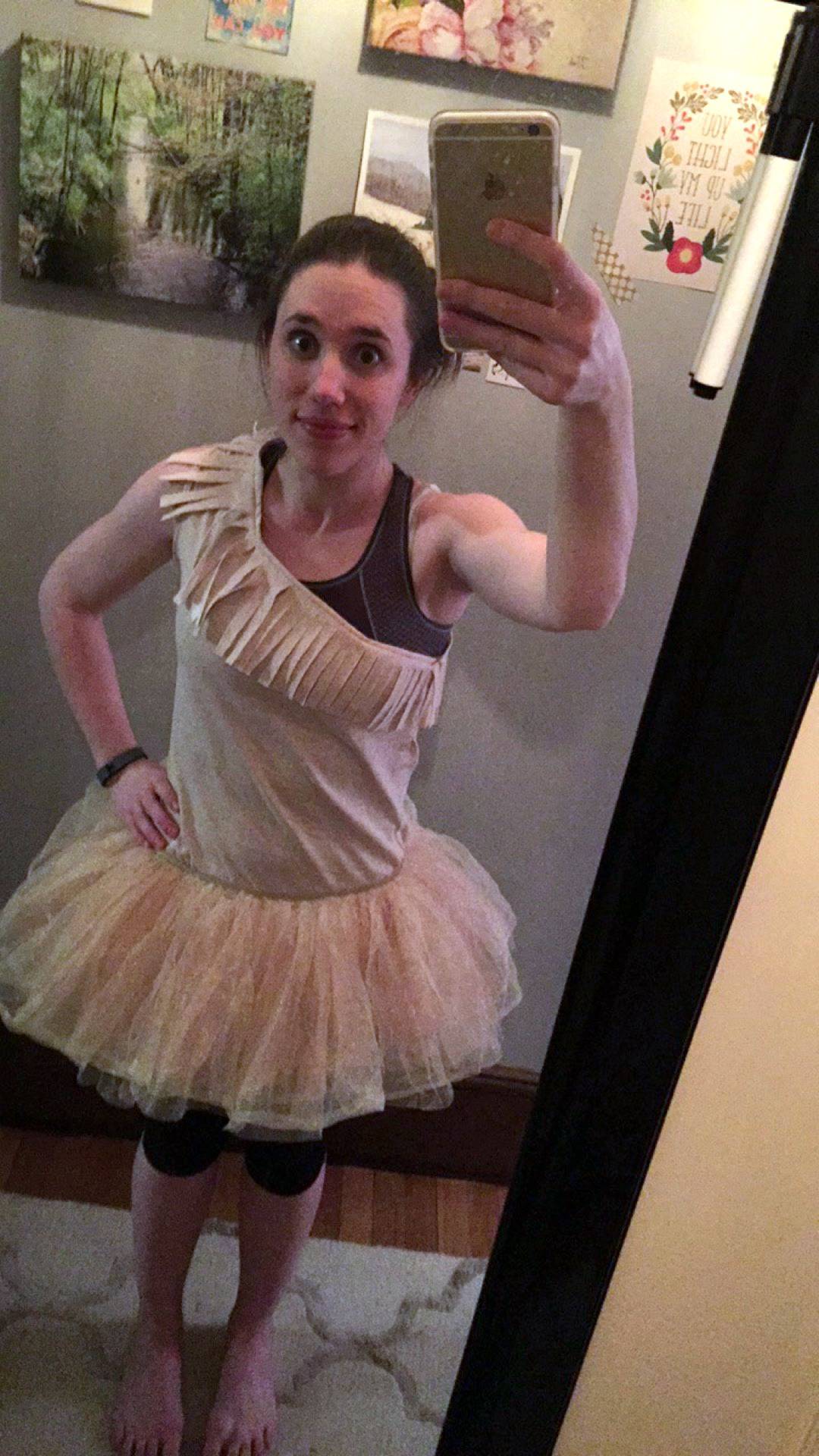 late night snapchats after i finished the top

I knew I would need to wear a real running shirt underneath the costume top, because wearing cotton for 13 miles is not fun. I just threw on a black tank first to solve that problem!

On the day of the race, I added a blue ribbon for the necklace and drew the orange band on my arm. 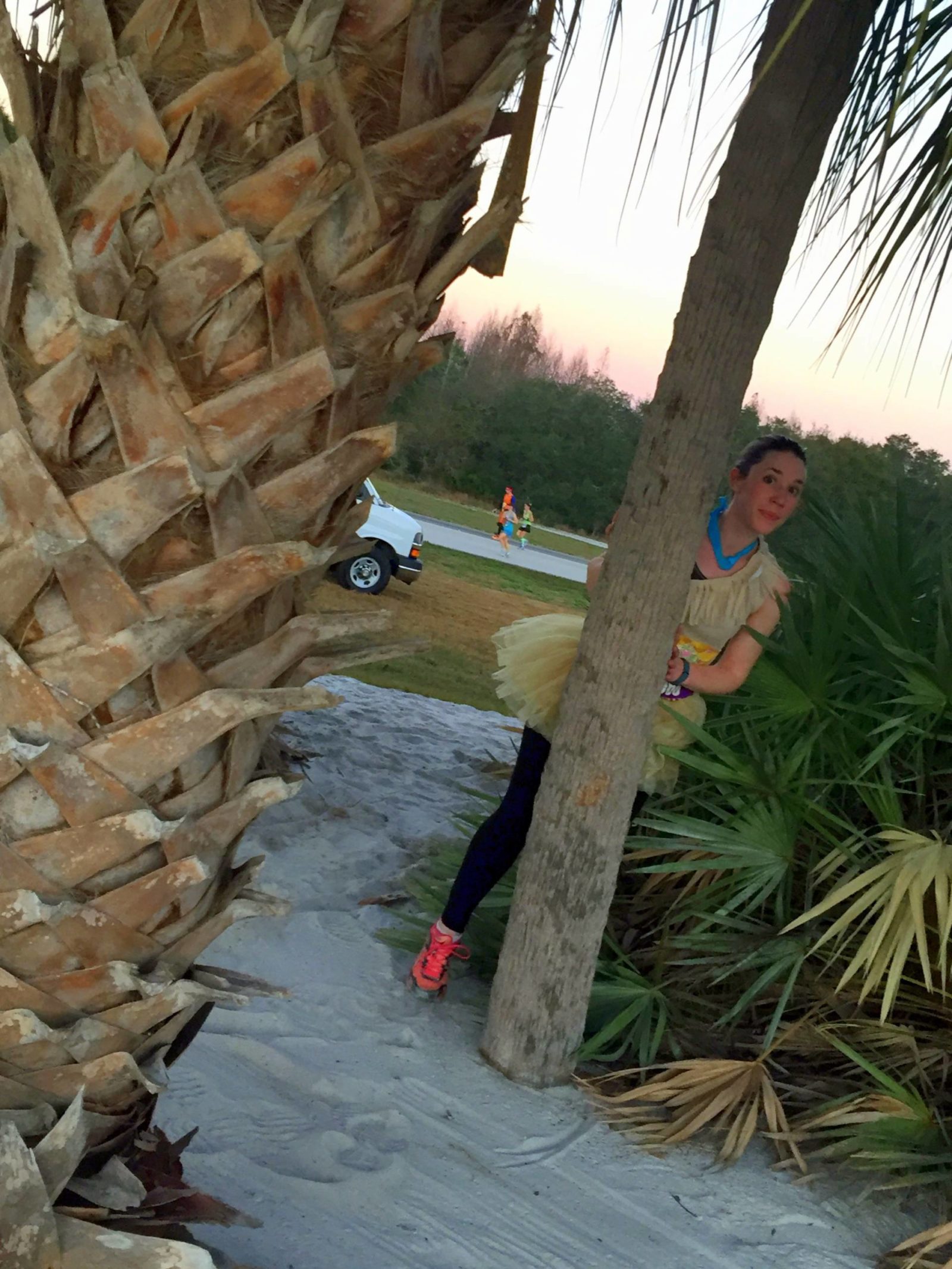 Stef found a “running tiara” at the Disney Princess Expo to complete her look, instead of the gold headband below. The gold gloves are from Party City.
Finding a yellow running shirt that isn’t NEON is surprisingly difficult, but this one is from TJMaxx.

Both tutus are from Party City – mine is gold, stef’s is yellow. 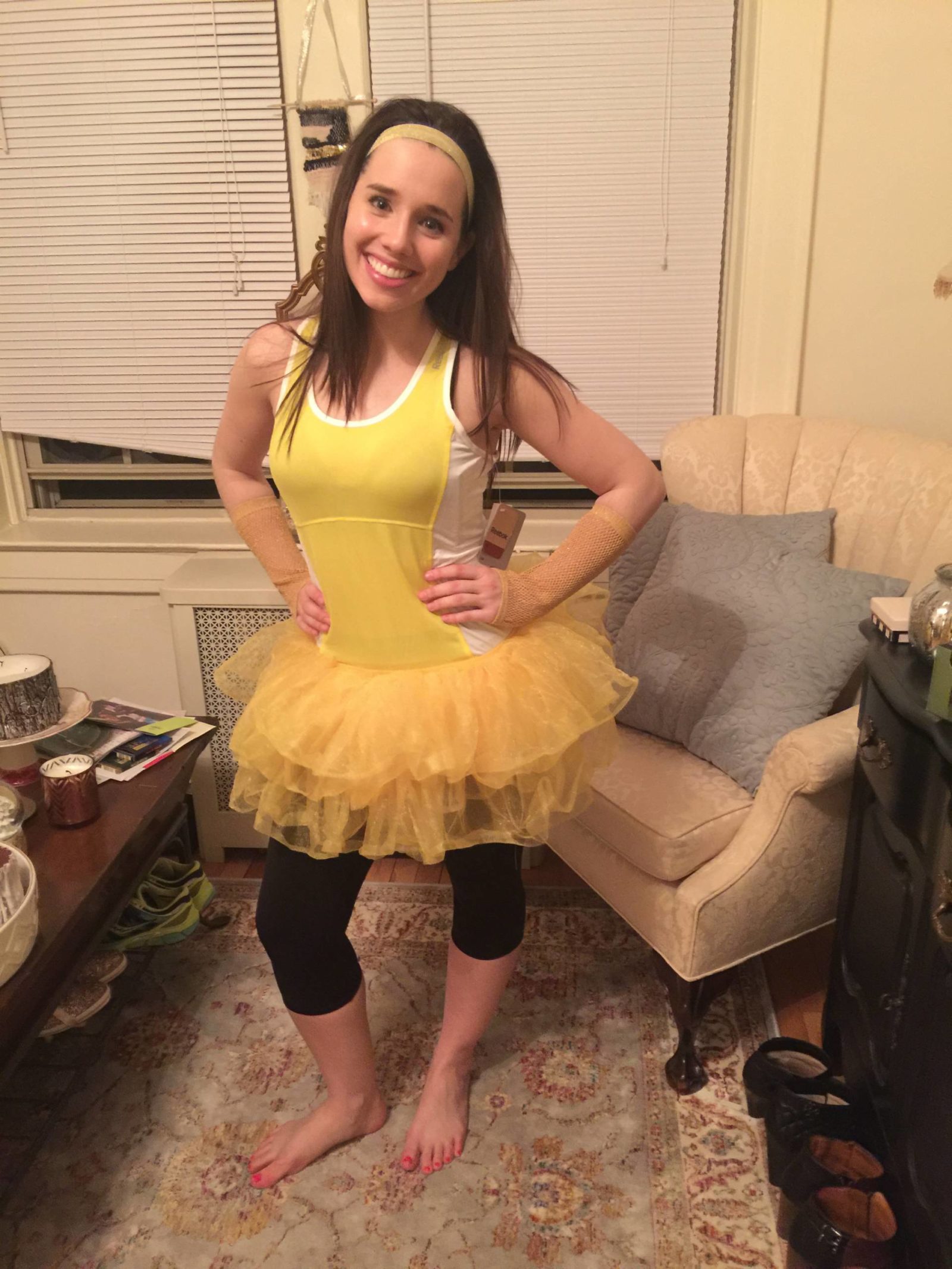 Hope these costumes give you some ideas for your own Disney Princess Half Marathon running costumes! We’re already planning our group costume for next year!