I considered including this in the birth story post, but that one was just getting too long. We’re having a very unusual breastfeeding journey, and many of you have asked how it’s going! Instead of sending a bunch of the same texts, I’m just writing the whole saga here 😊

I wrote a blog post that I never published about why 2020 was just A LOT for me specifically (everyone has enough of their own issues this year, so I didn’t want to add to your burden by posting all of mine). Not just COVID, but a few things.

One of those was our genetic testing.

I decided to do the Inheratest because other family members are carriers for genetic mutations, and I wanted to make sure I wasn’t a carrier. My results came back as a carrier for 2 genetic issues, and Eric got tested for those 2 things. So turns out I am a carrier for the serious genetic disease in my family, but Eric isn’t — so we were clear on that.

With galactosemia, the baby’s body doesn’t produce the enzymes necessary to process milk — not lactose, but any kind of milk including breastmilk. When not treated, it results in liver failure, loss of eyesight, and other developmental delays. Apparently, the mutation we have is less severe and may look like lactose intolerance later in life.

There’s only a 25% chance that any of our children will actually have the disease (this is just genetics math), and the genetic counselor told us no treatment would change in the first two weeks of life before we got his test results back.

Maybe misinformed? Only really interested in the other, more serious, disease?

Whatever the reason – I got to the hospital, and they asked if I had been eating dairy free all week in order to breastfeed. I was like, ummm no?

Apparently, the neonatalogist was very concerned about the galactosemia, and we would need to formula feed with hypoallergenic formula until we got the test results back, and then we could do whatever we wanted.

They were telling me this as my water broke, so I wasn’t clear on all the details. Eric ordered the fancy formula on Amazon prime, and I was like “I only have 2 bottles at home!! How are we supposed to formula feed!!??”

I’m not opposed to supplementing with formula if they said I needed to, I just really wasn’t thinking about formula at all.

THEN A FEW HOURS LATER someone said: nevermind, in order for the galactosemia to show up in test results, he needs to have enough milk in his system to test the enzymes, so we can start breastfeeding + normal formula so he has plenty of milk.

After 36 hours, we needed to switch to hypo-allergenic formula and start pumping until getting the test results back. Hopefully, I would be able to start breastfeeding at that point.

Because genetic testing is fairly new, most people don’t find out about galactosemia until 2 weeks later with the standard heel-prick testing. And by then, some of the developmental issues are already in progress. The hospital and the genetic doctors (geneticists?) were pretty much researching the best way to handle this while I was in labor because they’ve never known ahead of time.

While I wasn’t anticipating using my pump until around 4 weeks, I’m glad I ordered it through insurance before the baby came. The lactation consultant at the hospital started me pumping, then I learned everything I needed to know about the Spectra from Karrie Locher on instagram.

I’m writing this blog post while pumping, and I’m not sure why I went along with this plan. I was mostly confused. Not sure he’ll be able to latch if we find out that he’s negative? 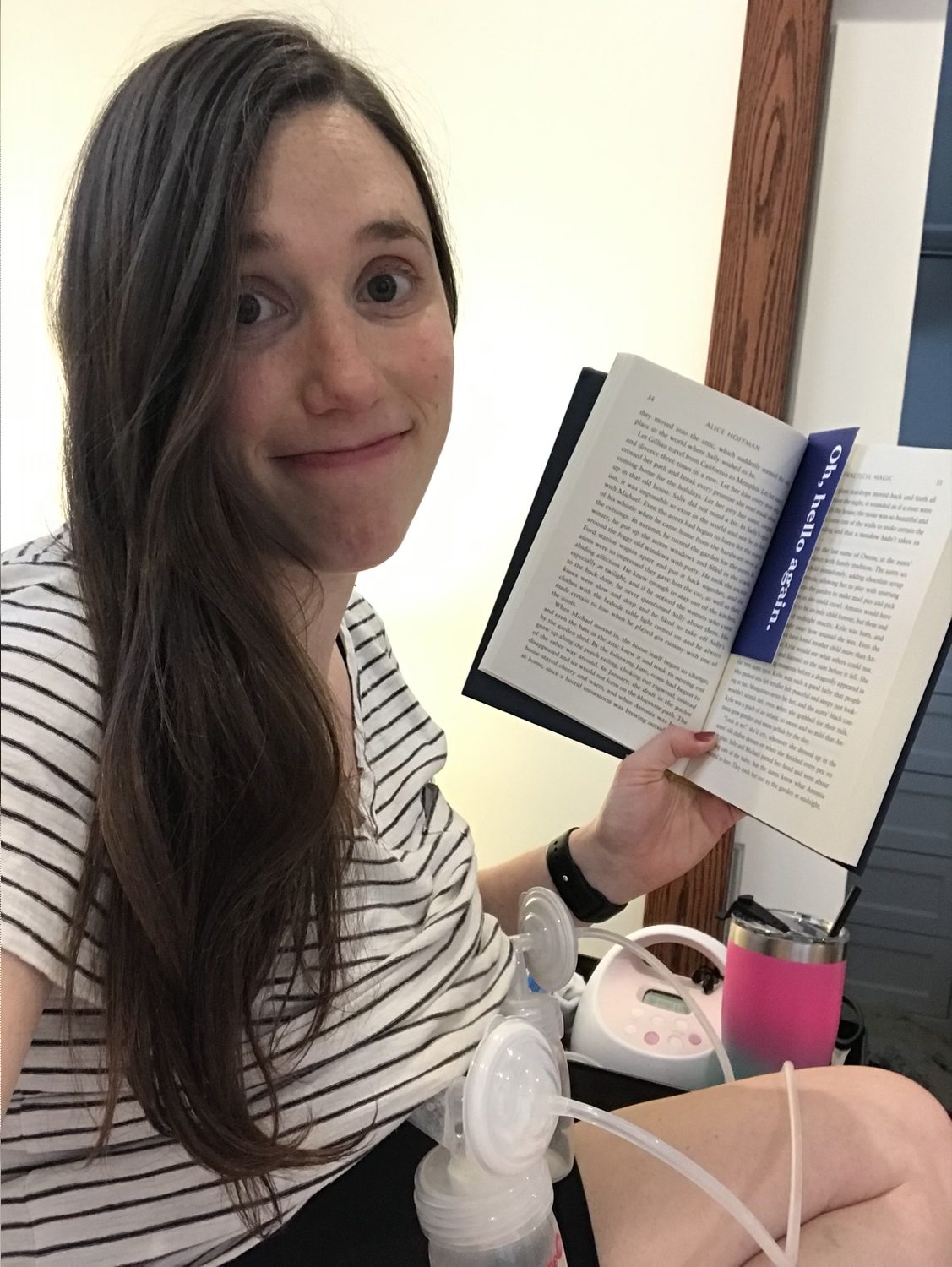 pretending this is fun by reading while pumping…

While we waited for the test results, I was waking up every 3 hours to pump, and sometimes that worked out to right before the baby’s hungry. Sometimes Eric feeds the baby. Mostly – it’s double work. Full-time exclusive pumpers are really dedicated.

Look at those eyes!

We went to the pediatrician for his physical and found out he’s negative for galactosemia! So when we got home it was time for a feeding, and I attempted nursing.

What a strange transition! You go from knowing your baby’s eating 3-4 oz to trying to guess when he’s finished. I started on my “slacker boob” side (this was pretty obvious from pumping), and he wasn’t very happy with that ha. When we switched to the faster-flow side he seemed to be latching and eating better. I figured if he’s hungry he’ll wake up early from his nap.

Anyway – going to call the lactation consultant at some point, because I don’t think he’s quite latching correctly… as most women struggle with.

When I’m back to working full time, I will be pumping again. For now, I’m mostly using the haakaa and sometimes I top him off with that milk right before we go to bed, so he gives us a nice long stretch of sleep.

I’m sure I’ll have another update soon!